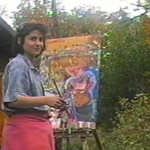 Patricia Canelake Painter in the Woods/documentary of early years from Frank Sander on Vimeo.

Frank Sander edited footage filmed by Liisa Welch. The footage was taken at Patricia Canelake's rural residence in the late nineteen eighties. The film documents her early painting years in the northern woods in rural Minnesota near Lake Superior.